Like Loading...
The problem with politics today is that too many politicians and political agendas have slumpatizers instead of sympathizers…

Customer: Yes, I don’t understand the alternatives and/or Yes, can I have both?

I mean, think about it.

Contractor: Do you want puppies or pies?

Customer: Yes, I need both!

Contractor: Do you want a deteronic frombotzer or a MacGuffin?

Customer: Yes, I have no clue.

Watching medical dramas when tired can have the strangest results:

Wait? What? They’re giving her a paralegal drip?!

I had an interesting discussion where the “Filter bubble” was declared dead and non-existent. That got my attention.

But first: “A filter bubble – a term coined by Internet activist Eli Pariser – is a state of intellectual isolation that allegedly can result from personalized searches when a website algorithm selectively guesses what information a user would like to see based on information about the user, such as location, past click-behavior and search history.” // English Wikipedia

I just looked at the Swedish and English Wikipedia page for “Filter bubble” for that insight (and read a lot “between the lines” since neither one of them really gave any definite answer to the question).

However, the whole discussion of whether a phenomenon such as a filter bubble is dead is an alarming sign that you know little or nothing about how computer systems work or can be programmed.

I.e. that the filter bubble is an external phenomenon and that in order to determine its full impact you’ll also need to study its effect on the mind. E.g. does the filter bubble make us more fundamentalist in our opinions, etc.

To do scientific studies, or experiments, to determine if the filter bubble does not exist is about as stupid and useless as performing scientific studies, and having lots of debates, of course, about whether it is possible for a Word document to contain the word “stupid”.

For all that we know, there could be a configuration parameter in Google and Facebook and their likes, called “enable-filter-bubble” that could have the value “false” today and “true” tomorrow.

Or for that matter could be set to “false” if the system detects activities that could indicate you are trying to perform an experiment to determine if a filter bubble exists.

So, if you publish a paper or article today saying that you have found no filter bubble, the evil social media platforms can change the value of that configuration parameter tomorrow (woahahaha!)

Research into confirmation bias, by all means, or how much effect a filter bubble, where such a thing does exist, has on people.

Obviously, keep looking for algorithms that seem to produce too biased search results and feed content that could prevent users from getting objective information.

But the only reasonable attitude towards specialized algorithms you do not know anything about (and in fact are likely forever prohibited by law from knowing enough about) is to assume you have to do a reality check now and again to verify that you’re not being manipulated.

Oh, and by the way, in the case of confirmation bias, the manipulator is you yourself, not an algorithm… in that case, the algorithm is just a tool to lull you into stupid satisfaction with your splendid, time-proven, world view… (Or maybe confirmation bias is a tool in the hands of the evil mind-controlling algorithm…)

Legislation that would prohibit mind-altering manipulative computer algorithms is, of course also a way to go… (imagine the EU spent all that energy getting all their citizens all these extremely tiresome “we’re-using-cookies”-banners when they could have protected us against mind control!)

I am not saying social media platforms and search engines are necessarily evil or trying to manipulate us. I think the filter bubble was an unintended consequence of trying to prevent information overflow and to stay interesting to users or in fact not losing them (all, of course in the name of the holy ad-sales-revenue).

Behavioral science or media studies are not able to tell us that there are no algorithms that produce search results and content feeds specialized to such an extent that we’re not exposed to new ideas.

They could, however, tell us if such algorithms are harmful to us or not (and if we end up in a world were one social media platform or search engine company owns every service we get information from—or our choices of information services produce that result—the answer is a resounding yes!)

You should probably not get all your news from Facebook or Twitter (and I don’t even know how that would work or what “news” you can get from those two, but that is frankly a subject for another post) or any one place.

I think state-sponsored TV and webs might still be OK.

Unless, of course, you’re worried that you’re living in a “western filter bubble”. Then Aljazeera or the likes might be something to look into.

Or are living in a country where state-sponsored TVs and webs are subject to censoring. Then maybe Facebook is the way to go… or at least get closer to good.

Otherwise, I think information consumption works pretty much like food consumption: don’t eat too much of just one thing… variation is key!

At the same time in a poor village far from where you are right now:

“Mom, why are the American murder robots called drones?”
“Honey, I don’t know, perhaps because it sounds better?”

Like Loading...
I think my neighbor is playing music. Or moving heavy furniture. It’s not always obvious which is which. 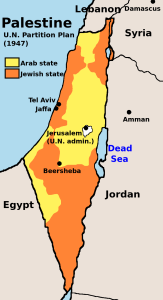 Browsing some historical maps, I came across this one. The UN plan for partitioning Palestine.

Even if you’re not a military strategist, or if you are a totally naive pacifist, the borders and the mishmash of different states on that map should give you pause.

I mean. I guess you can pass three people side by side from the southern part of the Jewish state to the part just above Jerusalem. But in the northern part… it’s probably air-ballooning that’s intended.

This map explains a lot to me. I’m not trying to defend Israel’s actions, even though I can understand them to some extent. In comparison, if Hitler had done to my country (Sweden) and its population what he did to the Jews about one in 20 would have survived. Sweden, with a population of 6.3 million in 1939, would have had some 300,000 people left at the end of the war.

But, that’s not exactly the topic of this post.

Looking at that map I can come up with a few reasons for why it was made as it was:

Of course, I suspect the real reason is that this is actually how the ethnicities in Palestine is divided. And sure, trying to mesh everything together in one single country is probably a bad idea, ask the former Yugoslavs.

But this map is like setting up a table in your home with several types of buffet food and then putting out plates and cutlery and become really surprised when your guests arrive, start putting the food on the plates and eat it instead of just enjoying the view and play Chess.

I mean, did they really think Israel would not try to reshape their country into something that was actually possible to not only defend but travel?

Former Yugoslavia is a great example here because the ethnicities are so mixed up that the only way to really put all different cultures into a single country would have been to create city-states, a concept abandoned some two thousand years ago.

Nope, in Yugoslavia Slovenes, Croats, Serbs, Bosniaks, and all other ethnicities had to accept a certain overlap to get any reasonable countries at all. It seems to have worked there, at least in comparison to the Yugoslav Wars.

It may have been less intrusive in the long run to give the Palestines one half and the Jews the other half, even if that meant some people would have to live in the “wrong part.” It’s not like some people in Palestine don’t feel they’re living in the wrong part as things stand today…

But then again, maybe I’m asking too much. This map was drawn up, pretty much by the same political system that felt A-bombing actual, real people was a great idea. And at that time they were also thinking more about long-term political grandstanding than solving any acute problems, so… why not?

Like Loading...
A: How is my recommendation doing?
B: We had to let him go…
A: Sorry to hear that, what happened?
B: He brought a bucket of shit to work…
A: That sounds serious… what did he do?
B: He literally brought a bucket of excrement… We had to call in our lawyers to refine the line in our contracts that says we own everything the employees produce… that’s obviously not what we want…