In Stockholm, where I live, we have commuter trains from somewhere in Europe (I think in-fact they are from Italy).

The trains have buttons that can be pressed to open the doors. On the inside and outside. These buttons, if one can even call them buttons since they neither have the “push-in” feeling of a button, nor look pretty pushable… in fact I believe my old design teacher at my university would say they have a low affordance for being pushed.

Although, being an avid fan of the TV series Alias, I have another view on these buttons as well… 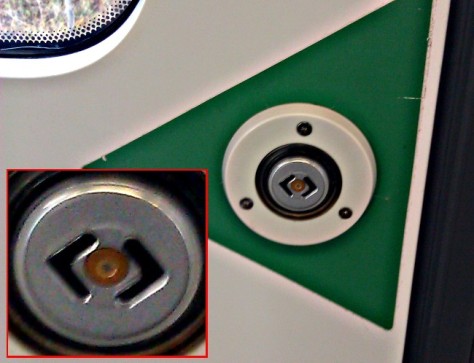 Now, that looks pretty much exactly like the symbol used by the renaissance genius and inventor Rambaldi from the TV series Alias.

Given that Swedish authorities have failed numerous times to teach us Swedes to push those buttons to open the doors to the trains without them having to open every door (especially advantageous when there’s low traffic in the summers or winters)… perhaps the buttons were never meant to be pushed? Perhaps they are the part of a sinister design to awake Rambaldi, or give some evil mastermind eternal life? Maybe that’s why so many people have a hard time pushing them? They’ve seen Alias and knows what happens to some of Rambaldi’s less fortunate Guinea pigs… ;o)

For those of you who do not know who Rambaldi is, check out wikipedia: http://en.wikipedia.org/wiki/Milo_Rambaldi

It made me laugh!

On a more serious note… hurry enjoying this clip… it will most likely be removed by the people owning the Game of Thrones trademark (yeah, the ones that doesn’t understand the modern media culture and doesn’t appreciate how much of a boost these kind of “pranks” are to their trademark…)

To celebrate there’s only a month (unfortunately a long month, but still) left until season 2 of Game of Thrones premieres (April 1, 2012), I’ve collected some trailers and teasers from youtube!

I like this trailer the most, it just has this… we’re-plotting-to-kill-each-other-feel to it, however these two are also very nice:

This year they’re travelling a lot to get to all the good places, like Croatia, Iceland and Belfast!

Episode 7 of Stargate Atlantis season 5 starts on a foggy Gate World planet where two persons, apparently natives make their way through the fog. As they move on they come upon a sitting figure turned with her back at them. They approach and we can all see something bad is going to happen. One of them touch the figure who leaps on her feet, growling. Screaming, running and dying ensues and one of the scarier episodes of Stargate Atlantis starts.

This episodes continues a theme development in Atlantis that at least I noticed already in previous episodes (not sure if it was in the Shrine or Ghost in the Machine I noticed it first…): The use of women not only as bosses or doctors (which to be honest is just a continuation of the age old matriarch and caretaker roles assigned to women). This time we see them as grunts. And although the episode had me biting my nails and turning down the volume (in preparation for the bang-crash- monster-attack- heart-attack sequence of events) none of the women came even close to the classic horror movie almost-naked-blond- running-screaming-through-the-forest- when-she-should-be-home- with-her-door-locked moves.

This fresh and interesting episode only features Joe Flanigan from the permanent cast and I’m giving it an 4 out of 5. Its only demerits would be that it is a rather uncharacteristic Atlantis episode, and that the cast-dynamic suffers a bit from not having any of the other permanent cast members.