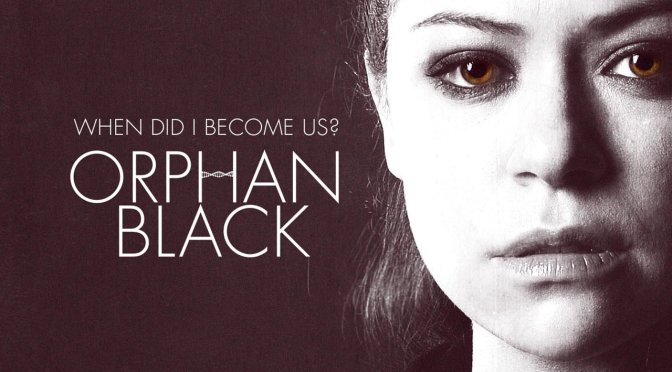 Orphan Black is a science fiction TV-show. It features Sarah Manning, a street-wise Orphan from England, who witnesses a woman looking exactly like her committing suicide by jumping in front of a train.

Being a survivor-type, and perhaps also driven by curiosity, Sarah picks up the dead woman’s bag, abandoned at the platform, and concoct a plan to take over her identity in order to steal money from her.

Sarah needs the money to get away with her daughter, Kira, whom she has not seen in almost a year, and her step-brother, Felix.

Taking over the dead woman’s life proves to present more problems than solutions and soon Sarah finds herself in the middle of a complex plot involving murderers, clones and dirty cops.

Tatiana Maslany plays Sarah, and Allison, and Cosima and…

It soon turns out that the  woman Sarah witnessed committing suicide is far from the only one looking like her. In fact, the plot is full of Sarah-Manning-look-a-like clones, from the home making soccer mom Allison, to the smart scientist Cosima, to the outright crazy Helena.

All these characters are played by one actor, Tatiana Maslany. Since most every scene of the show features at least one clone, Maslany is pulling the show in the most literary sense!

From a technical point of view it gets extra interesting when there’s more than one clone in front of the camera, especially when they interact by touch.

If you check the above film you might pick up that there’s no green screen thing going on here. Instead the camera is programmed so that it will make the exact same moves repeatedly and Tatiana can play the scene as one clone, then the other, and finally the shots are merged digitally.

When clones are touching a recording of the scene with no actors is used to create a background that can be used to block out Tatianas double, Catherine. Then a scene where Tatiana plays the clone is superimposed on the blocked out area.

It’s pretty much subtraction and addition … but with moving pictures… 😀

Orphan Black has just finished season two and will, hopefully, be back for season three in 2015. So if you’re new to the show you have two nice seasons to catch up, and I really recommend you do!

Part from being a technical masterpiece and a proof that there are some really sharp actors out there, Orphan Black is also a mesmerizing story dipping into themes like identity and nature versus nurture.

If you haven’t seen it, I recommend that you check out Orphan Black!